TL;DR    With the popularity of Immutable.js and Seamless-immutable going through the roof, who needs yet another immutability library? Maybe you, if you don’t want to lock read access to your data through a non-native API, need reasonable write performance and an easy-to-use API. That’s exactly the balance Timm tries to strike.

We’ve read the posts, watched the videos, understood the concepts. Immutability can be really useful in many scenarios; for example:

In all of these cases, using immutable data is probably the way to go. It can make code more predictable, allows trivial object comparisons, and feels right at home with functional programming. What else could we ask for?

As it turns out, immutable operations don’t come without their own drawbacks. They’ll never be as fast as in-place mutations, no matter how hard you try. You’ll need to bend your mind around some algorithms, especially recursive ones. And it may become a pain to work with in some cases, depending on the tools/libraries you work with.

But what if we found a way to alleviate the cognitive burden on the developer, keep performance reasonable, and allow us to reap the benefits of immutability? Enter Timm, a tiny library that tries to solve some of these trade-offs.

Immutable.js is one of the big names in the immutability arena, a rock-solid library that offers you everything you’ll ever need and then some more. Performance is also excellent, considering the many things it does, and its objects (Maps, Lists and many others) are opaque, so they’re protected against your accidental mutations.

However, after using it in several projects I’ve always felt the friction of mixing Immutable.js’ Maps and Lists with native JS objects and arrays. It’d be impossible to count how many times I got strange runtime errors because I forgot to use Map’s getter (image.get('url')), instead of plain old dot notation (image.url), or a warning because I took the familiar array length property instead of List’s size.

So: seamless or protected? Timm goes for seamless. It would be possible to have native and protected objects via Object.freeze(), but there seems to be some performance bottlenecks (or alternatively different behaviours in Development and Production mode, which seems just as bad). In conclusion: you can accidentally mutate your objects (watch out!), but:

Immutable.js aims at being both comprehensive and performant. Optimising read/write speeds in immutable operations while keeping an attractive API is not trivial, and Immutable.js uses advanced techniques (persistent data structures and structural sharing) to achieve just that.

While not providing all the bells and whistles, Timm is 10 times smaller (~ 1 kB minified and compressed) and uses much more basic tools, although it also focuses on performance. Reads are as fast as native (you don’t even need the library for that), and writes are also reasonably fast (benchmarks): 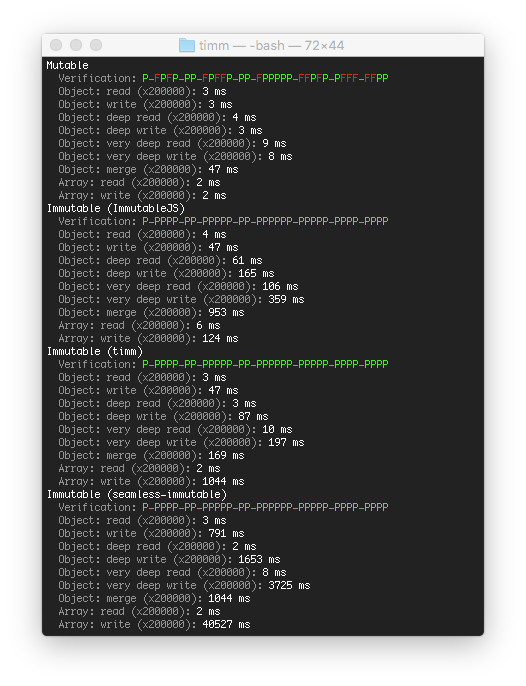 …and what about the JS spread operator?

Finally, why not exploit ES6’s shiny new array spread operator and its upcoming sibling for objects? After all, native syntax can’t be beaten! Why not do the following?

The spread operator always creates a new object, no matter whether we are actually modifying the original one. By contrast, Timm and Immutable.js only instantiate a new one (lazily) when they detect that the operation is in fact mutating the object; this way, you’ll create fewer objects, alleviating memory requirements and garbage collection events. And what’s more: you’ll get fewer false positives when checking whether an object has changed.

After all this, which is the most suitable option?